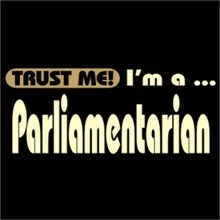 At the May meeting, President Bickford announced that a member had challenged our custom of not approving the treasurer's report.  Subsequently, that month's report was voted on and approved.

In researching this issue, there is found to be strong consensus among parliamentarians and parliamentarian groups that the treasurer's report should NOT be approved by the organization.

For an organization our size, it is appropriate that an informational report be given at each meeting,  It can be questioned, but not voted on for adoption or approval.  At the end of our fiscal year (on or about September 1), a committee examines the books and determines if they are correct.  At the September meeting, their findings are presented to the membership who may then vote to "accept the report."

The following three articles elaborate on this topic:

Approving the treasurer’s report is not advisedOnly audited financial reports should be adopted by an organization.Posted on November 30, 2013 by Julie Pioch, Michigan State University Extension

A typical meeting agenda includes a report from the treasurer. As a professional registered parliamentarian with Michigan State University Extension, I often notice that many groups place the treasurer’s report just after the approval of the minutes on their agendas. Logically, this makes sense as it is important to know the status of a group’s finances before discussing other matters. Following the treasurer’s report, however, I often observe that the presiding officer asks the group for a motion to approve or accept the treasurer’s report.
This is an ill-advised custom and a common mistake that groups make. Unfortunately, only groups who have been through litigation having had to take a member to court over financial misfeasance or embezzlement understand the importance of not approving financial reports whose accuracy the board cannot fully substantiate. Allow me to explain:
The treasurer’s responsibilities within an organization vary, but the treasurer is generally the officer entrusted with the custody of its funds. According to Roberts Rules of Order, Newly Revised 11th Edition, “The specific duties of the treasurer will vary depending on the size and complexity of the society; but this officer cannot disburse funds except by authority of the society or as the bylaws prescribe. The treasurer is required to make a full financial report annually or as the bylaws may prescribe, and to make such interim reports as the assembly or the executive board may direct.”
Following a regular report of the treasurer, the presiding officer may ask the members if there are any questions about the report. Once questions are complete, the chair should state that the report be placed on file for audit (if the group has an audit committee or sends their financials to a professional auditor) or for review (if the group has an internal committee review the finances for example) or simple move on to the next item of business. The report should be filed with the secretary. There is no required action needed. Instead, it is the auditor’s report (or review committee’s report) or Treasurer’s annual report (which has been audited) that is adopted by the group. The audit report may come before the group based on the organization’s rules. It is advised that an audit of some form be done annually or, at a minimum any time there is a change in officers. The specifics should be described within the group’s governing documents.
The treasurer is an office in which a group places a great deal of trust and therefore it seems that an assembly would believe their reports are accurate. However, without an audit or third party review of the statements, activity, receipts and process there is no way to ensure reports are correct as presented. So unless an organization’s by-laws specify adopting your treasurer’s report, it is not recommended. I know of no federal, state, local or parliamentary rule that states the treasurer’s report is to be adopted.

This is one in a series of articles on parliamentary procedure and how to conduct more effective organizational meetings. For a complete list in this series go to the Parliamentary Procedure resource.


From the California State Association of Parliamentarians roberts-rules.com :

"Reports of Officers, Boards, Standing Committees. (This includes correspondence, treasurer's report, etc. Treasurer's report is never adopted or voted upon unless it has been audited. )"

54. Adoption or Acceptance of Reports. When the report of a committee has been received, that is, has been presented to the assembly and either read or handed to the chair or the secretary, the next business in order is the disposal of the report, the proper disposition depending upon its nature.

(1) If the report contains only a statement of fact or opinion for the information of the assembly, the reporting member makes no motion for its disposal, as there is no necessity for action on the report. But if any action is taken, the proper motion, which should be made by some one else, is to "accept the report," which has the effect of endorsing the statement and making the assembly assume responsibility for it.