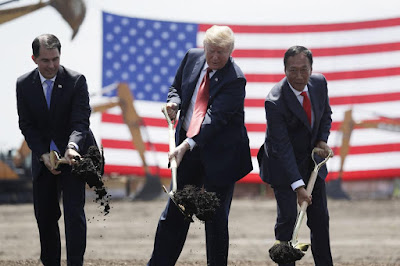 To give you something else to be outraged about, click on this link to an article updating the fiasco that the FoxConn deal devolved into:

Posted by SPARTA News and Notes at 9:10 AM No comments:

Ronna Romney McDaniel, the chairperson of the Republican National Committee, on Sunday faced backlash after suggesting that "82% of Americans" make more than $400,000 per year.

In a tweet on Sunday, McDaniel pointed to a video clip from a conservative media group, which asserted that "middle income earners" will see a tax increase under a Joe Biden presidency. However, Biden has said that he will not raise taxes on individuals making less than $400,0000 per year.

"Joe Biden would raise taxes on 82% of Americans, and we cannot afford it!" McDaniel wrote.

Posted by SPARTA News and Notes at 6:16 PM No comments:

Science flies you to the moon;

Religion flies you into buildings.

The older we get,

the less “life in prison”

I am the DEMOCRATIC SOCIALIST

Trump warned you about

That will be fun.