At Least They're Saying it out Loud 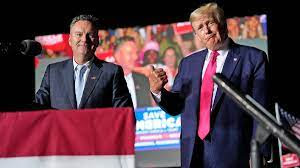 Wisconsin GOP Gov. Nominee Makes Terrible Promise About
What Will Happen If He Wins

Tim Michels, the Republican nominee for governor of Wisconsin, promised a group of supporters this week that the GOP would seize permanent control of the state if he is elected in next week’s midterms.

“Republicans will never lose another election in Wisconsin after I’m elected governor,” the multimillionaire construction executive said during a campaign stop on Monday.

Posted by SPARTA News and Notes at 9:25 AM