One of those Short-term Memory Lapses

From the Daily Kos: 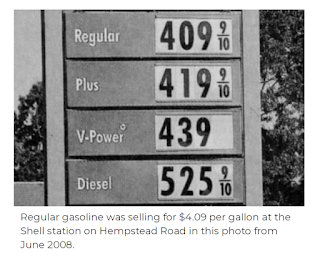 Don’t just take my word for it, Fortune Magazine made the same point back in March. Back then, the price of gas broke the $4.144 record it hit back in the heart of George Dumbya’s Great Recession.

Adjusted for inflation the real cost of a gallon of gas from July 2008 shoots up to $5.37 in today's dollars—well above the current cost of $4.318 per gallon.

So the next time your crazy MAGAt neighbor (or your favorite MSM source) screams that Biden’s Commie Sociamalism is driving up gas prices, remind him that it was George Dumbya and the GOP that really set the reigning record for gas prices, and nearly collapsed the entire world’s economy, back in 2008.

By the way, the real reason for today’s prices can be traced to three things:

Captain Frogbert
Community (This content is not subject to review by Daily Kos staff prior to publication.)

Posted by SPARTA News and Notes at 7:43 PM