Are We Still a Democracy?

Take your pick of indications of chaos.  Threats by Russia in the Ukraine, the Tennessee school board banned Pulitzer Prize-winning graphic novel 'Maus' from Holocaust curriculum, Ron Johnson declaring that it's not society's job to take care of children, Gov. Youngkin of Virginia setting up a snitch line for parents to report the teaching of "inherently divisive concepts" such as racism, and on and on.  This is my pick for today:

From Hullabaloo, (Downgrade) a report from the Carnegie Endowment for International Peace rates our increasing polarization. "On a polarity scale of minus 10 (authoritarian: North Korea, Saudi Arabia, Bahrain) to plus 10 (democracy: Denmark, Switzerland, New Zealand, Canada), the United States, for several reasons, saw itself downgraded in 2016 from the plus 10 it held for decades to a plus 8."

Polarity is no longer between Democrats and Republicans. Ms. Walter, a University of California professor and expert on civil conflicts asserts:

"The groups that tend to start wars, especially ethnic wars, are groups that had once been dominant, and have either recently lost power, or they see themselves losing power demographically over time. They’re the ones who feel this deep sense of loss, loss of status. They feel this deep sense of resentment. And importantly, they truly believe that the country is theirs, that that the country should look like them, it should practice their religion, it should be based on their culture, because it’s always been like that."  More at Alternet.com anocracy 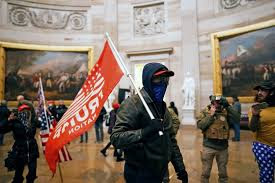