Surprise! It's all the Teachers' fault!

Blaming problems on the victims was a honed into an art form by a certain European group during the thirties.  After one particularly brutal night of arson, vandalism, assault, and murder committed on the victimized group, a certain Mr. H.G. was upset by all that property destruction.  All that lovely property should have been confiscated instead.  Mr. H.H. came up with the brilliant idea that the victimized group be fined the cost of the destroyed property.   Problem solved!   They may not have invented the concept of "blame the victim", but they certainly perfected it.

Politicians have learned that lesson well.  Lately, the GOP and its social media and journalistic sources have done nothing but.  Covid-19 making a mess of our schools.  But don't take responsibility for the inaction and deliberate misinformation spread by our "president" for most of a year; instead it's those greedy, powerful teachers who don't want to work and are doing all they can to corrupt and ruin the children they teach.  Selfish, lazy teachers! 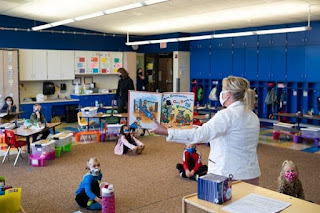