Control the data, control the story.
Posted by SPARTA News and Notes at 8:56 AM No comments:

Searching for the "Why?"

In other words, the Trump presidency was not the product of immaculate conception. His promise to make America great again appealed to a large minority whose sense of itself and its place in the world was shaken to its core. First, by the September 11 attacks. Second, by the majority electing the first black president.

The first demonstrated to generations born since Vietnam that their country is not untouchable. The second forced a white population previously able to ignore shifting demographics to reckon with the fact that it would eventually have to share power with people it considers inferiors. Too many Americans need people to look down on to feel better about themselves. They’re terrified of losing that. #BLM means “black lives matter too. They hear “… more than mine.” Nonwhite demands for equality feel like oppression. They are having none of it. They want their Great White Hope.

Posted by SPARTA News and Notes at 8:53 AM No comments:

We May Be in Trouble

Unpersuaded by more than 100,000 pandemic deaths in the United States, 45 percent of strong conservatives, four in 10 Republicans and nearly as many evangelical Christians say they’d be unlikely to get vaccinated against the coronavirus, even for free.

Overall, 27 percent of adults in an ABC News/Washington Post poll say they definitely (15 percent) or probably (12 percent) would not get the vaccine. Among them, half say they don’t trust vaccines in general, while nearly a quarter don’t think it’s needed in this case. 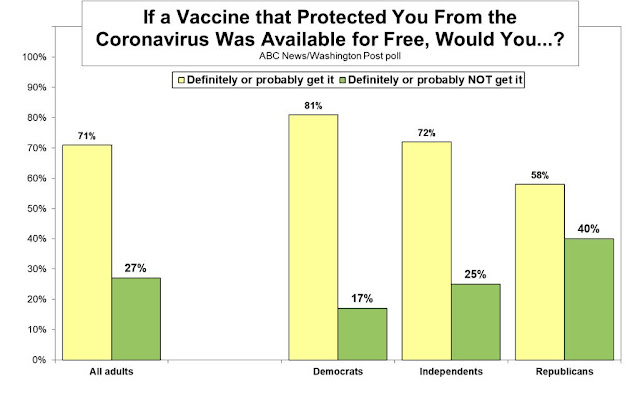 Posted by SPARTA News and Notes at 9:29 AM No comments: