“These THUGS are dishonoring the memory of George Floyd, and I won’t let that happen. Just spoke to Governor Tim Walz and told him that the Military is with him all the way. Any difficulty and we will assume control but, when the looting starts, the shooting starts. Thank you!” Trump tweeted in the early hours of Friday morning.

On May 1, Trump praised a group of protesters in Michigan who were armed with assault rifles and carrying signs with violent and anti-Semitic rhetoric.

“The Governor of Michigan should give a little, and put out the fire,” Trump tweeted of the protesters, who were demanding a reopening of the state economy amid the COVID-19 pandemic. “These are very good people, but they are angry. They want their lives back again, safely! See them, talk to them, make a deal.”

The rhetoric from those protesters was so violent that Facebook removed a group organizing a similar protest, as they were calling for violence against Michigan’s Democratic Gov. Gretchen Whitmer, including calls to “hang, behead, shoot, and beat” her, according to the MetroTimes, a Detroit news outlet.

In fact, Trump has egged on similar protests calling on governors to reopen the government in the wake of the coronavirus, even though those protests have gotten increasingly violent and ugly.

At a protest on Long Island on May 14, protesters held a sign that read, “Hang Fauci. Hang Gates. Open all our states.“

Trump also seemed to condone a protester who got in the face of a journalist who was simply reporting on the protest, retweeting a video of the incident with the comment, “people can’t get enough of this. Great people!”

Trump also infamously praised the white supremacist protesters in Charlottesville, Virginia, in 2017, who were protesting the removal of Confederate monuments.
He said there were “very fine people” among the crowd of white supremacists, who chanted “blood and soil” and “you will not replace us” — which are white supremacist and anti-Semitic statements.

“If you look at what I said, you will see that that question was answered perfectly,” Trump said in April 2019 of his “very fine people” comment. “And I was talking about people that went because they felt very strongly about the monument to Robert E. Lee, a great general.”

I have privilege as a white person because I can do all of these things without thinking twice:
I can go birding in the Park (#ChristianCooper)
I can go jogging (#AmaudArbery)
I can relax in the comfort of my own home (#BothemSean and #AtatianaJefferson)
I can ask for help after being in a car crash (#JonathanFerrell and #RenishaMcBride)
I can have a cellphone (#StephonClark)
I can leave a party to get to safety (#JordanEdwards)
I can play loud music (#JordanDavis)
I can sell CDs (#AltonSterling)
I can sleep (#AiyanaJones)
I can walk from the corner store (#MikeBrown)
I can play cops and robbers (#TamirRice)
I can go to church (#Charleston9)
I can walk home with Skittles (#TrayvonMartin)
I can hold a hair brush while leaving my own bachelor party (#SeanBell)
I can party on New Years (#OscarGrant)
I can get a normal traffic ticket (#SandraBland)
I can lawfully carry a weapon (#PhilandoCastile)
I can break down on a public road with car problems (#CoreyJones)
I can shop at Walmart (#JohnCrawford)
I can have a disabled vehicle (#TerrenceCrutcher)
I can read a book in my own car (#KeithScott)
I can be a 10yr old walking with our grandfather (#CliffordGlover)
I can decorate for a party (#ClaudeReese)
I can ask a cop a question (#RandyEvans)
I can cash a check in peace (#YvonneSmallwood)
I can take out my wallet (#AmadouDiallo)
I can run (#WalterScott)
I can breathe (#EricGarner)
I can live (#FreddieGray)
I CAN BE ARRESTED WITHOUT THE FEAR OF BEING MURDERED (#GeorgeFloyd)
White privilege is real. Take a minute to consider a Black person’s experience today.
#BlackLivesMatter
Posted by SPARTA News and Notes at 9:19 AM No comments: 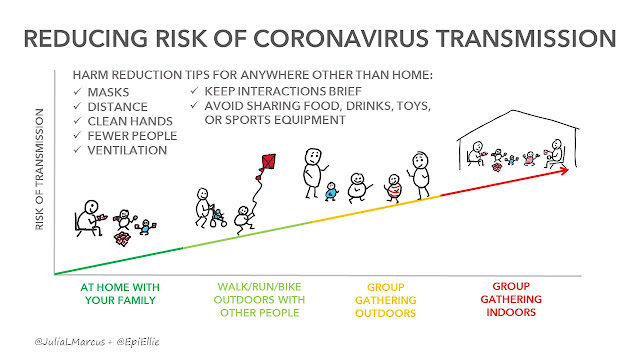 The article gives good advice on how to minimize risks as we transition from a "Safe at Home"  to a "Safer at Home" status.  Check out this link: https://digbysblog.net/2020/05/know-the-risks-act-accordingly/ />
Posted by SPARTA News and Notes at 9:22 AM No comments:

Hey! The World and It's People Aren't Totally Horrible!

The real Lord of the Flies

What a pleasant story to read! We’re all familiar with the entirely fictional story of Lord of the Flies, in which ship-wrecked boys revert to the natural savagery of all humans and set up a brutal regime and start oppressing and killing each other. It makes for a good story, I guess. Except that similar events happened for real in 1965, with a half-dozen 13-16 year old boys ‘borrowing’ a fishing boat, a storm disabling the boat, and then the boys were stranded on a rocky island in the Pacific for over a year. It all turned out differently.

Then, on the eighth day, they spied a miracle on the horizon. A small island, to be precise. Not a tropical paradise with waving palm trees and sandy beaches, but a hulking mass of rock, jutting up more than a thousand feet out of the ocean. These days, ‘Ata is considered uninhabitable. But “by the time we arrived,” Captain Warner wrote in his memoirs, “the boys had set up a small commune with food garden, hollowed-out tree trunks to store rainwater, a gymnasium with curious weights, a badminton court, chicken pens and a permanent fire, all from handiwork, an old knife blade and much determination.” While the boys in Lord of the Flies come to blows over the fire, those in this real-life version tended their flame so it never went out, for more than a year.

The kids agreed to work in teams of two, drawing up a strict roster for garden, kitchen and guard duty. Sometimes they quarrelled, but whenever that happened they solved it by imposing a time-out. Their days began and ended with song and prayer. Kolo fashioned a makeshift guitar from a piece of driftwood, half a coconut shell and six steel wires salvaged from their wrecked boat – an instrument Peter has kept all these years – and played it to help lift their spirits. And their spirits needed lifting. All summer long it hardly rained, driving the boys frantic with thirst. They tried constructing a raft in order to leave the island, but it fell apart in the crashing surf.

Worst of all, Stephen slipped one day, fell off a cliff and broke his leg. The other boys picked their way down after him and then helped him back up to the top. They set his leg using sticks and leaves. “Don’t worry,” Sione joked. “We’ll do your work, while you lie there like King Taufa‘ahau Tupou himself!”

They survived initially on fish, coconuts, tame birds (they drank the blood as well as eating the meat); seabird eggs were sucked dry. Later, when they got to the top of the island, they found an ancient volcanic crater, where people had lived a century before. There the boys discovered wild taro, bananas and chickens (which had been reproducing for the 100 years since the last Tongans had left).

I imagine it could have gone badly if there’d been even one psychopath in the group, but then there would have been a year of chaos and self-destruction instead, and the fishing boat that eventually rescued them would have found nothing but bones and maybe some starving kids. Instead, we see that natural selection favored the population that cooperated, shared labor, and protected the weak and injured.

It’s curious that this optimistic true story of survival fell into obscurity, while the more pessimistic, cynical, and fictional story by William Golding sold 10s of millions of copies.